A 10-year-old dyslexic Brisbane boy has raised money through crowdfunding to travel to the London Book Fair. 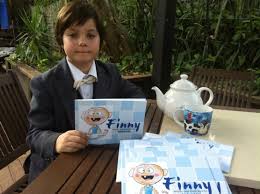 Author Aedan Lias has self-published eight books despite having dyslexia, and aims to push his work to publishers in the UK next year.

The Brisbane boy began fundraising on crowdfunding site Pozzible over a month ago, setting out to reach his $6,000 target to cover his travel overseas.

He told 612 ABC Brisbane’s Rebecca Levingston that he wants to inspire others with dyslexia with his work.

“I want to get my books out there and if someone sees my books there they would say ‘that kid has done it’ and then they would tell others,” he said.

“I needed $6,000 to get there and I started a Pozzible campaign and I reached my target.

“I am very excited and I cannot wait to get to London.”

The suit-wearing schoolboy will set off with his father to London in April 2015.

Aedan said he hoped he would get to meet some of his favourite authors while he was there.

“They get all the famous authors and publishers and they find books and proof them and get right behind you,” he said.

“Andy is really lovely and he pledged too,” she said.

“I am so proud of Aedan and he has proved that you can turn something negative into a positive.

“He has a great support team behind him and all his work needs to be proofed and edited really well.”

Though writing and reading can be hard for the 10-year-old, Aedan said his writing process involved other family members lending a hand.

“I have co-wrote some of my books with my grandfather, my sister, my brother and my awesome mum,” he said.

“Finny was my first book I wrote, You Can’t Call Me Dyslexic is one of my favourite books and The Horse Story is about horses that give up but then try again.

“I can use audio books and I can speak into an app that helps me write – modern-day technology is amazing.”


The Advantages of Being Dyslexic

Perusing Harry Potter for science? Scans show brain activity as readers get caught in a story