When we speak the English language, we use a combination of the many sounds the letters of the alphabet make. I use spoken language to help children to identify how to recognize these sounds in the words.

“The English language has 26 letters A-Z, but these letters or combinations of these letters, have just 46 sounds. With over 1200 different spelling combinations to make these 46 sounds, it makes a lot of sense to start with the sounds when teaching reading and spelling.”

Some foreign languages have a direct correlation between their graphic letter symbols and the sounds they make in words. What makes the English language tricky, is that the symbols or letters in the alphabet can make multiples sound. Not only that, when some letters are used together, they form a completely new sound, think of these letters; th, sh, ch in words like ‘think’, ‘shop’ and ‘chip’.

I have developed a code which allows children to use their ability to speak to decode the English language. It’s called the Speech to Spelling Code™ and it uses the 46 phonemes or sounds in spoken words. While some people believe there are more than 70 sounds, I have made this learning process incredibly simple meaning children only have to learn 46.

Once the 46 sounds were identified, I developed specific visual cues for each sound and then added colour coding.

“The more visual cues or codes a struggling reader has, the easier it will be for them to experience success and catch up.”

These 46 sounds that I identified are made up of 26 consonant sounds and 20 vowel sounds. Let’s take a closer look at these now.

There are 7 groups of consonant sounds and they are shown in blue and combinations of letters are shown in dark green.

In this group, you can see when you say the words ‘that’ and ‘thong’ out loud, the “th” part of these words make two very different sounds.

You can see here that the one letter ‘x’ makes two different sounds, but you can hear the difference when you say each word out loud.

Now we move onto the vowels sounds, these can be very tricky because there are so many sounds for these vowels.

There are 3 groups of vowel sounds and then the tricky letter ‘Y’ which sometimes pretends to be a vowel in certain words. You will notice here that vowel sounds are shown in red.

I have put this last vowel sound in light green because this is a lazy vowel or schwa vowel. These schwa vowel sounds are especially difficult.

Here are some examples of when the letter ‘Y’ acts like a vowel and the different sounds it makes.

Now this is a lot to take in for any learner let alone a struggling reader, so when I teach the Speech to Spelling Code™, I break all this information into short 10-minute tutorials. In each tutorial, the different sounds are explained one at a time and there is lots of repetition and time for practice. 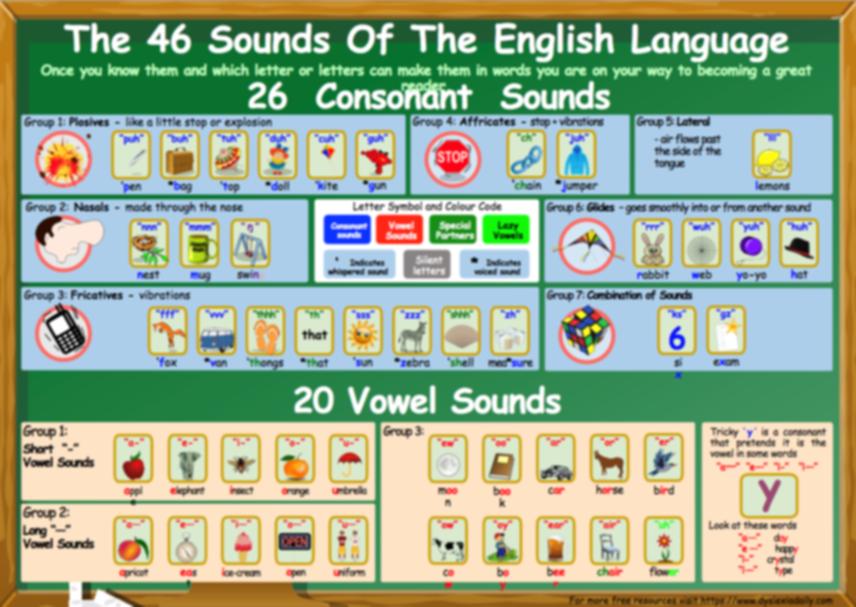 There is also a poster that comes with the program so that the children can refer to it. The chart has lots of visual cues including pictures, visual symbols and the colour coding of; vowels, consonants, silent letters, schwa vowels and combination sounds.

If you found this information useful and think that The Ten Minute tutor might be helpful for your child, click here, for more information.


What is your child’s Super-Power? Your Survey Results