They know through experience that books hold the key to a magical door of adventure, fantasy, information and incredible story telling, yet the struggle they experience when trying to read means that door is hard to open.

This can be extremely frustrating and will often put children and teens off reading books altogether which limits their exposure to good literature and the ongoing development of their vocabulary and literacy skills.

There are books though that have been written and created with struggling readers in mind, to nurture and encourage their efforts and to entertain and inspire their imaginations.

When parents and teachers read to children or provide audio books they are creating a learning bridge, allowing then to access books until such time as they develop the skills to read unassisted.

As a teacher you can generally tell if a child has been exposed to books by the way they speak, the vocabulary they use and by the way they express themselves in writing regardless of their spelling skills. There are many famous writers who were poor spellers and are dyslexic.

Here are some great suggestions for Primary and Elementary Children 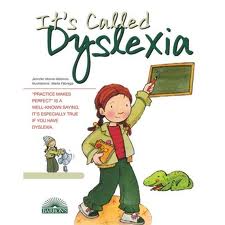 The Alphabet War: A Story About Dyslexia
By Dianne Burton Robb
A story book for children about Adam, a young dyslexic boy learning to read. Adam represents the creative, talented and imaginative spirit in all of us and the author expertly describes Adam’s frustration and near defeat as he learns to overcome his shortcomings with the help of his mother and tutor. It’s impossible not to cheer him on as he learns to stop pretending and feeling behind and breaks the “code” to win the war against words. The confidence he gains in himself is emphasized by the colourful, life-like illustrations. Recommended for anyone with a child struggling with dyslexia. Reviewed by dyslexia-parent.com

Football Academy
Reading The Game
By Tom Palmer
My son loved this book about an 11 year old boy who is a great soccer player and learns to confront his dyslexia and seek help.
By Liz Dunoon Melbourne Australia

Dyslexia Wonders
By Jennifer Smith
Written by 12-year-old Jennifer Smith, Dyslexia Wonders reveals the daily struggles of a child plagued by dyslexia. Happy-go-lucky until she entered Kindergarten, Jennifer seemed like the other bright children her age. She was energetic, curious and talkative. But when it came time to learn the ABCs, to read or to tie her shoes, Jennifer couldn’t comprehend and her world began to slowly collapse. As time passed, it became clear to her that she was indeed different from her classmates. She felt alone, afraid and stupid; but most of all, she was ashamed of herself for not being able to learn.
Reviewed by dyslexia-parent.com


Percy Jackson And The Lightning Thief
By Rick Riordan
“At first sight, the young hero of this book doesn’t have much going for him. 12-year-old Percy Jackson is dyslexic, has attention deficit hyperactivity disorder, keeps getting him thrown out of schools and hasn’t seen his father for years. He has a nasty, sneering stepfather. The good news is that he is a Greek demi-god, with supernatural powers.”
Reviewed by dyslexia-parent.com”
There are more books in this series plus movies to watch.” Liz Dunoon – Editor of Dyslexia Daily

Pony Pals Series
By Jeanne Betancourt
A popular series about three girls and their adventures on their backyard ponies. One of the three main characters – Anna – is dyslexic, a fact that is mentioned in every one of the 44 books in this series. Anna doesn’t like reading and writing as much as her friends, but she loves to draw. While the other two Pony Pals write their solutions to Pony Pal Problems, Anna always draws hers. Anna’s dyslexia is featured in many of the Pony Pal stories and is at the centre of the plot for two of the Pony Pal books – #2 A PONY FOR KEEPS and #38 PONIES ON PARADE. In A PONY FOR KEEPS, Anna’s parents say that she cannot keep her pony, Acorn, if her grades do not improve. The Pony Pals, with a little help from their teacher, figure out why Anna has trouble with reading and writing and save the day – but not before Anna has run away with Acorn and the three girls and their ponies have had another Pony Pal adventure.
Reviewed by dyslexia-parent.com

Any books promoted by the Dr. Seuss brand
Dr, Seuss’s books have continued to create confidence in emerging readers with a limited use of vocabulary. They are perfect books to allow for repetitive practice and learning to sound out real and nonsense words with a bit of fun. We all have a favourite one or two. See the list below in order of how you should introduce them to your child depending on their reading level.

Dr. Seuss’s ABC By Dr Seuss
Hop on Pop By Dr. Seuss
One Fish, Two Fish, Red Fish, Blue Fish By Dr. Seuss
Then (50 – 100 Word Vocabularies)
Green Eggs and Ham By Dr Seuss
Go, Dog, Go! By P.D. Eastman
Ten Apples Up On Top By Theo Le Sieg
Put Me in the Zoo By Robert Lopshire
Are You My Mother? By P.D Eastman
Snow By Dr. Seuss By P.D Eastman and Roy McKie 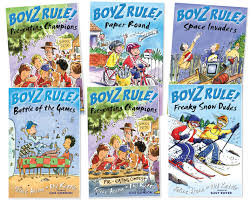 The ‘Boys Rule’ and ‘Girls Rock’ Book Series
By Felice Arena & Phil Kettle, ‘Girls Rock’ By Shay Kettle (Phil’s daughter)
The ‘Boys Rule’ and ‘Girls Rock’! Series has been written with the less able or more reluctant reader in mind. They have funny storylines aimed especially at children in Years 3 to 6 with a reading age of between 7 and 8. Each of the books follows a pair of boys’ or girls’, getting in and out of scrapes in everyday situations and are ideal to read in pairs or in guided reading groups. A non-fiction section at the end of each book includes key facts, interesting extra information and a quiz.
“My children loved these books.” Liz Dunoon – Editor of Dyslexia Daily

‘Zac Power’ – Test Drive Series
By H.I.Larry
The series is based upon the adventures of Zac Power, a twelve-year-old boy, and his fifteen-year-old brother, Leon. Zac is a secret agent for the fictitious Government Investigation Bureau (GIB), and Zac’s adventures frequently see him saving the world. These books are aimed at middle to upper primary students. These books have large print, labelled diagrams of the gadgets and other illustrations, a limit of 40 words maximum on each page and are 48 pages in length.
Liz Dunoon – Editor Dyslexia Daily


Recommended Reading For Parents and Teachers

Can You Develop Dyslexia?